This lecture computes versions of Arellano’s [Are08] model of sovereign default.

The model describes interactions among default risk, output, and an equilibrium interest rate that includes a premium for endogenous default risk.

The decision maker is a government of a small open economy that borrows from risk-neutral foreign creditors.

The foreign lenders must be compensated for default risk.

The government borrows and lends abroad in order to smooth the consumption of its citizens.

The government repays its debt only if it wants to, but declining to pay has adverse consequences.

The interest rate on government debt adjusts in response to the state-dependent default probability chosen by government.

This can lead to

Such dynamics are consistent with experiences of many countries.

In this section we describe the main features of the model.

Potential output is realized only in periods in which the government honors its sovereign debt.

The output good can be traded or consumed.

Consumption sequences enjoyed by households are affected by the government’s decision to borrow or lend internationally.

The government is benevolent in the sense that its aim is to maximize (13.1).

The government is the only domestic actor with access to foreign credit.

Because household are averse to consumption fluctuations, the government will try to smooth consumption by borrowing from (and lending to) foreign creditors.

The only credit instrument available to the government is a one-period bond traded in international credit markets.

The bond market has the following features

Earnings on the government portfolio are distributed (or, if negative, taxed) lump sum to households.

When the government is not excluded from financial markets, the one-period national budget constraint is

Here and below, a prime denotes a next period value or a claim maturing next period.

To rule out Ponzi schemes, we also require that \(B \geq -Z\) in every period.

When a government is expected to default next period with probability \(\delta\), the expected value of a promise to pay one unit of consumption next period is \(1 - \delta\).

Therefore, the discounted expected value of a promise to pay \(B\) next period is

Next we turn to how the government in effect chooses the default probability \(\delta\).

At each point in time \(t\), the government chooses between

Defaulting means declining to repay all of its current obligations.

If the government defaults in the current period, then consumption equals current output.

But a sovereign default has two consequences:

While in a state of default, the economy regains access to foreign credit in each subsequent period with probability \(\theta\).

Informally, an equilibrium is a sequence of interest rates on its sovereign debt, a stochastic sequence of government default decisions and an implied flow of household consumption such that

To express these ideas more precisely, consider first the choices of the government, which

In a recursive formulation,

Expressed recursively, the value of defaulting is

The value of paying is

The three value functions are linked by

The government chooses to default when

and hence given \(B'\) the probability of default next period is

Given zero profits for foreign creditors in equilibrium, we can combine (13.3) and (13.4) to pin down the bond price function:

The equilibrium objects are the value function \(v(B, y)\), the associated default decision rule, and the pricing function \(q(B', y)\).

We’ll use our code to replicate Arellano’s results.

After that we’ll perform some additional simulations.

We use a slightly modified version of the algorithm recommended by Arellano.

Here is a more detailed description of our algorithm:

We use simple discretization on a grid of asset holdings and income levels.

The output process is discretized using a quadrature method due to Tauchen.

As we have in other places, we accelerate our code using Numba.

We define a class that will store parameters, grids and transition probabilities.

Notice how the class returns the data it stores as simple numerical values and arrays via the methods params and arrays.

We will use this data in the Numba-jitted functions defined below.

Here is the utility function.

Next we introduce Bellman operators that updated \(v_d\) and \(v_c\).

Here is a fast function that calls these operators in the right sequence.

We can now write a function that will use the Arellano_Economy class and the functions defined above to compute the solution to our model.

We do not need to JIT compile this function since it only consists of outer loops (and JIT compiling makes almost zero difference).

In fact, one of the jobs of this function is to take an instance of Arellano_Economy, which is hard for the JIT compiler to handle, and strip it down to more basic objects, which are then passed out to jitted functions.

Finally, we write a function that will allow us to simulate the economy once we have the policy functions

Let’s start by trying to replicate the results obtained in [Are08].

In what follows, all results are computed using Arellano’s parameter values.

The values can be seen in the __init__ method of the Arellano_Economy shown above.

Details on how to compute the figures are reported as solutions to the exercises.

The first figure shows the bond price schedule and replicates Figure 3 of Arellano, where \(y_L\) and \(Y_H\) are particular below average and above average values of output \(y\). 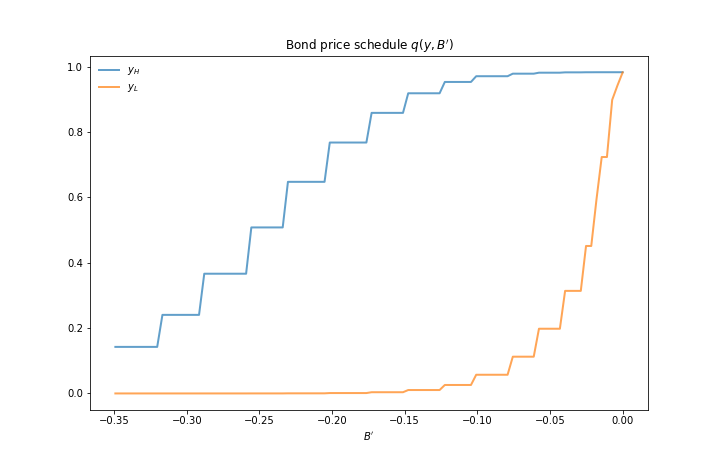 The grid used to compute this figure was relatively fine (y_grid_size, B_grid_size = 51, 251), which explains the minor differences between this and Arrelano’s figure.

The figure shows that

The next figure plots value functions and replicates the right hand panel of Figure 4 of [Are08]. 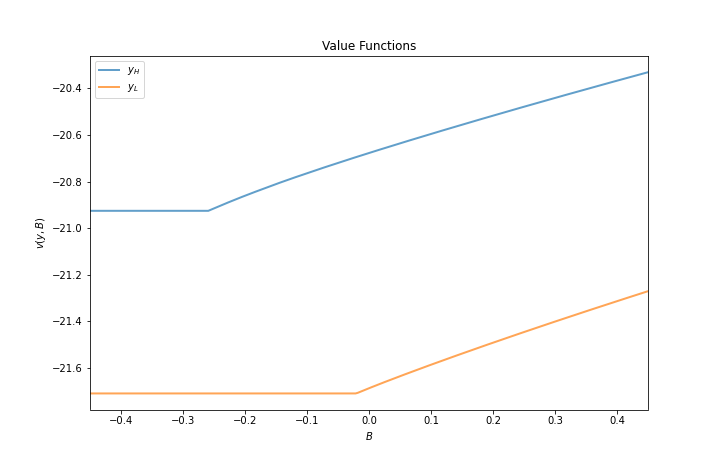 We can use the results of the computation to study the default probability \(\delta(B', y)\) defined in (13.4).

The next plot shows these default probabilities over \((B', y)\) as a heat map. 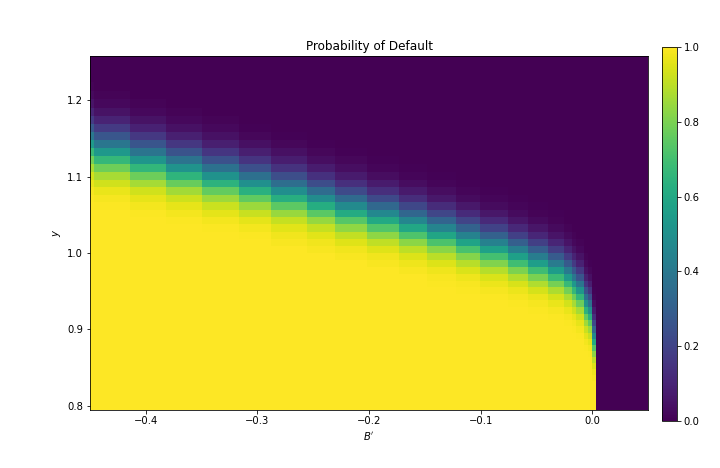 As anticipated, the probability that the government chooses to default in the following period increases with indebtedness and falls with income.

The grey vertical bars correspond to periods when the economy is excluded from financial markets because of a past default. 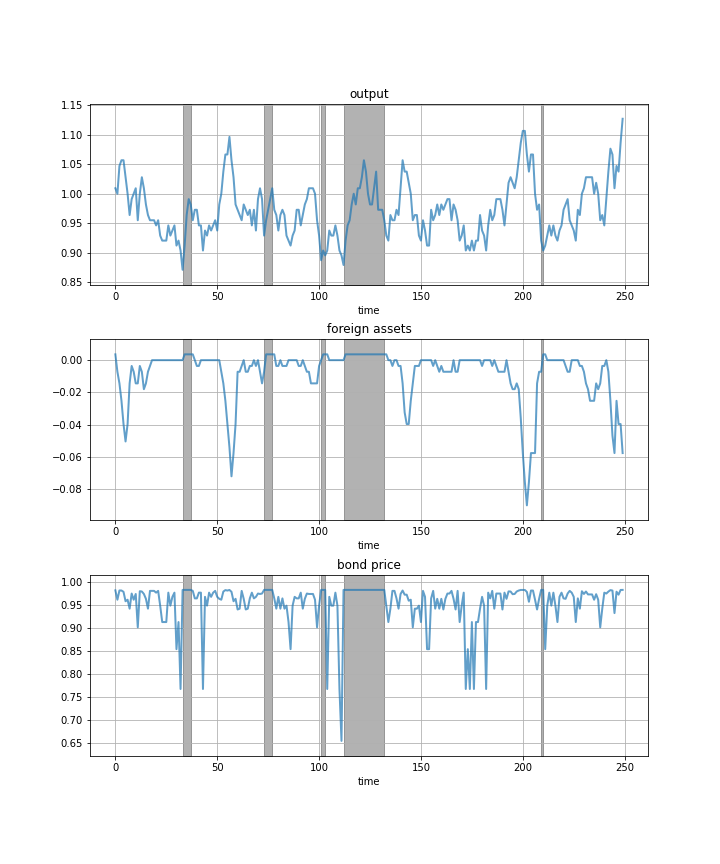 One notable feature of the simulated data is the nonlinear response of interest rates.

Periods of relative stability are followed by sharp spikes in the discount rate on government debt.

To the extent that you can, replicate the figures shown above

Draw a plot of the value functions

Plot a time series of major variables simulated from the model