This lecture modifies a Bellman equation to express a decision-maker’s doubts about transition dynamics.

The decision-maker has a single approximating model.

He calls it approximating to acknowledge that he doesn’t completely trust it.

He fears that outcomes will actually be determined by another model that he cannot describe explicitly.

All that he knows is that the actual data-generating model is in some (uncountable) set of models that surrounds his approximating model.

He quantifies the discrepancy between his approximating model and the genuine data-generating model by using a quantity called entropy.

(We’ll explain what entropy means below)

He wants a decision rule that will work well enough no matter which of those other models actually governs outcomes.

This is what it means for his decision rule to be “robust to misspecification of an approximating model”.

A value-maximizing decision-maker enlists the aid of an (imaginary) value-minimizing model chooser to construct bounds on the value attained by a given decision rule under different models of the transition dynamics.

The original decision-maker uses those bounds to construct a decision rule with an assured performance level, no matter which model actually governs outcomes.

In reading this lecture, please don’t think that our decision-maker is paranoid when he conducts a worst-case analysis. By designing a rule that works well against a worst-case, his intention is to construct a rule that will work well across a set of models.

Our “robust” decision-maker wants to know how well a given rule will work when he does not know a single transition law \(\ldots\).

\(\ldots\) he wants to know sets of values that will be attained by a given decision rule \(F\) under a set of transition laws.

Ultimately, he wants to design a decision rule \(F\) that shapes these sets of values in ways that he prefers.

With this in mind, consider the following graph, which relates to a particular decision problem to be explained below 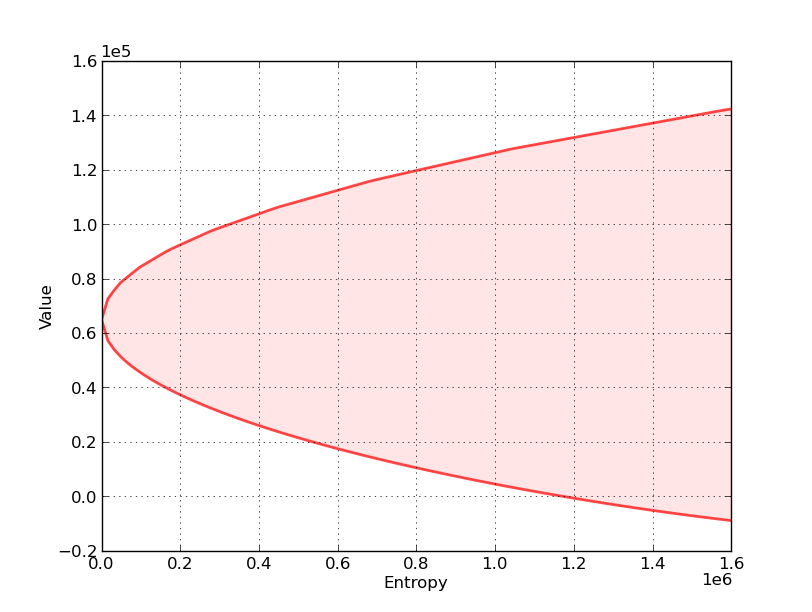 The figure shows a value-entropy correspondence for a particular decision rule \(F\).

The shaded set is the graph of the correspondence, which maps entropy to a set of values associated with a set of models that surround the decision-maker’s approximating model.

The shaded region indicates that for all models having entropy less than or equal to the number on the horizontal axis, the value obtained will be somewhere within the indicated set of values.

In the next figure, 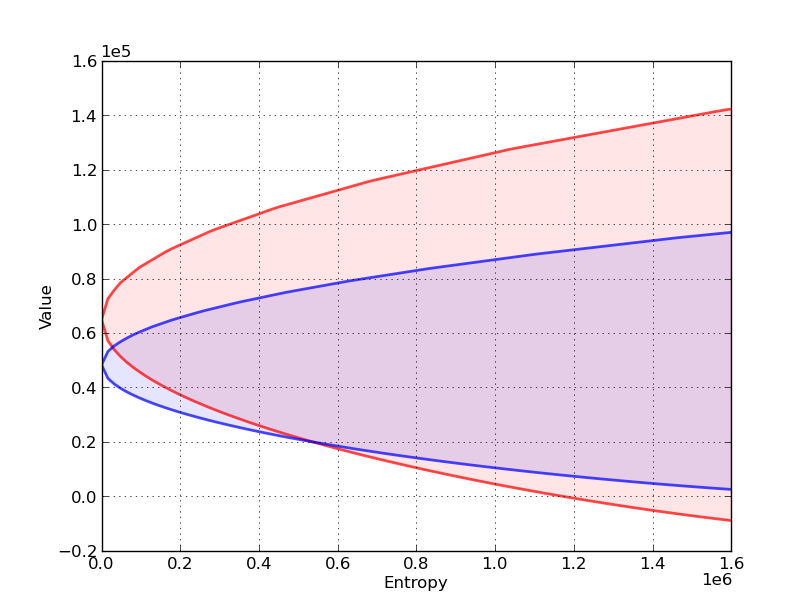 Below we’ll explain in detail how to construct these sets of values for a given \(F\), but for now \(\ldots\).

We will also describe how to choose \(F\) to shape the sets of values.

This will involve crafting a skinnier set at the cost of a lower level (at least for low values of entropy).

If you want to understand more about why one serious quantitative researcher is interested in this approach, we recommend Lars Peter Hansen’s Nobel lecture.

Our discussion in this lecture is based on

For simplicity, we present ideas in the context of a class of problems with linear transition laws and quadratic objective functions.

To fit in with our earlier lecture on LQ control, we will treat loss minimization rather than value maximization.

To begin, recall the infinite horizon LQ problem, where an agent chooses a sequence of controls \(\{u_t\}\) to minimize

subject to the linear law of motion

We also allow for model uncertainty on the part of the agent solving this optimization problem.

In particular, the agent takes \(w_t = 0\) for all \(t \geq 0\) as a benchmark model but admits the possibility that this model might be wrong.

As a consequence, she also considers a set of alternative models expressed in terms of sequences \(\{ w_t \}\) that are “close” to the zero sequence.

She seeks a policy that will do well enough for a set of alternative models whose members are pinned down by sequences \(\{ w_t \}\).

If our agent takes \(\{ w_t \}\) as a given deterministic sequence, then, drawing on intuition from earlier lectures on dynamic programming, we can anticipate Bellman equations such as

Our tool for studying robustness is to construct a rule that works well even if an adverse sequence \(\{ w_t \}\) occurs.

As we’ll see, this will eventually lead us to construct the Bellman equation

The penalty parameter \(\theta\) controls how much we penalize the maximizing agent for “harming” the minimizing agent.

By raising \(\theta\) more and more, we more and more limit the ability of maximizing agent to distort outcomes relative to the approximating model.

One of our main tasks will be to analyze and compute the matrix \(P\).

First, using matrix calculus, you will be able to verify that

and \(I\) is a \(j \times j\) identity matrix. Substituting this expression for the maximum into (25.3) yields

Under some regularity conditions (see [HS08a]), the operator \(\mathcal B \circ \mathcal D\) has a unique positive definite fixed point, which we denote below by \(\hat P\).

Note also that if \(\theta\) is very large, then \(\mathcal D\) is approximately equal to the identity mapping.

Furthermore, when \(\theta\) is large, \(\hat K\) is approximately equal to zero.

Conversely, smaller \(\theta\) is associated with greater fear of model misspecification and greater concern for robustness.

25.4. Robustness as Outcome of a Two-Person Zero-Sum Game¶

What we have done above can be interpreted in terms of a two-person zero-sum game in which \(\hat F, \hat K\) are Nash equilibrium objects.

Agent 1 is our original agent, who seeks to minimize loss in the LQ program while admitting the possibility of misspecification.

Agent 2 is an imaginary malevolent player.

Agent 2’s malevolence helps the original agent to compute bounds on his value function across a set of models.

We begin with agent 2’s problem.

A natural way to say “sufficiently close to the zero sequence” is to restrict the summed inner product \(\sum_{t=1}^{\infty} w_t' w_t\) to be small.

However, to obtain a time-invariant recursive formulation, it turns out to be convenient to restrict a discounted inner product

Using a Lagrangian formulation, we can express this problem as

For the moment, let’s take \(\theta\) as fixed, allowing us to drop the constant \(\beta \theta \eta\) term in the objective function, and hence write the problem as

What’s striking about this optimization problem is that it is once again an LQ discounted dynamic programming problem, with \(\mathbf w = \{ w_t \}\) as the sequence of controls.

The expression for the optimal policy can be found by applying the usual LQ formula (see here).

Because “minimizers minimize” we have

Technically, it is a “separating hyperplane”.

At a particular value of entropy, the line is tangent to the lower bound of values as a function of entropy.

In particular, the lower bound on the left side of (25.14) is attained when

To construct the lower bound on the set of values associated with all perturbations \({\mathbf w}\) satisfying the entropy constraint (25.9) at a given entropy level, we proceed as follows:

This procedure sweeps out a set of separating hyperplanes indexed by different values for the Lagrange multiplier \(\theta\).

To construct an upper bound we use a very similar procedure.

Because “maximizers maximize” we have

which in turn implies the inequality

The upper bound on the left side of (25.17) is attained when

Now in the interest of reshaping these sets of values by choosing \(F\), we turn to agent 1’s problem.

Now we turn to agent 1, who solves

In other words, agent 1 minimizes

Once again, the expression for the optimal policy can be found here — we denote it by \(\tilde F\).

Holding all other parameters fixed, we can represent this relationship as a mapping \(\Phi\), where

In particular, for any given \(\theta\),

A sketch of the proof is given in the appendix.

Now we turn to the stochastic case, where the sequence \(\{w_t\}\) is treated as an IID sequence of random vectors.

In this setting, we suppose that our agent is uncertain about the conditional probability distribution of \(w_{t+1}\).

The agent takes the standard normal distribution \(N(0, I)\) as the baseline conditional distribution, while admitting the possibility that other “nearby” distributions prevail.

These alternative conditional distributions of \(w_{t+1}\) might depend nonlinearly on the history \(x_s, s \leq t\).

To implement this idea, we need a notion of what it means for one distribution to be near another one.

Here we adopt a very useful measure of closeness for distributions known as the relative entropy, or Kullback-Leibler divergence.

Using this notation, we replace (25.3) with the stochastic analog

The distribution \(\phi\) is chosen as the least desirable conditional distribution in terms of next period outcomes, while taking into account the penalty term \(\theta D_{KL}(\psi, \phi)\).

This penalty term plays a role analogous to the one played by the deterministic penalty \(\theta w'w\) in (25.3), since it discourages large deviations from the benchmark.

The maximization problem in (25.22) appears highly nontrivial — after all, we are maximizing over an infinite dimensional space consisting of the entire set of densities.

However, it turns out that the solution is tractable, and in fact also falls within the class of normal distributions.

and the maximizer is the Gaussian distribution

Since constant terms do not affect minimizers, the solution is the same as (25.6), leading to

To solve this Bellman equation, we take \(\hat P\) to be the positive definite fixed point of \(\mathcal B \circ \mathcal D\).

Substituting the robust policy into (25.24) we obtain the worst-case shock distribution:

Note that the mean of the worst-case shock distribution is equal to the same worst-case \(w_{t+1}\) as in the earlier deterministic setting.

Before turning to implementation, we briefly outline how to compute several other quantities of interest.

To solve this we take \(P_F\) to be the fixed point

If you skip ahead to the appendix, you will be able to verify that \(-P_F\) is the solution to the Bellman equation in agent 2’s problem discussed above — we use this in our computations.

The code can be found on GitHub.

Here is a brief description of the methods of the class

Let us consider a monopolist similar to this one, but now facing model uncertainty.

and all parameters are strictly positive.

The period return function for the monopolist is

To form a linear regulator problem, we take the state and control to be

For the transition matrices, we set

Our aim is to compute the value-entropy correspondences shown above.

The standard normal distribution for \(w_t\) is understood as the agent’s baseline, with uncertainty parameterized by \(\theta\).

The code for producing the graph shown above, with blue being for the robust policy, is as follows 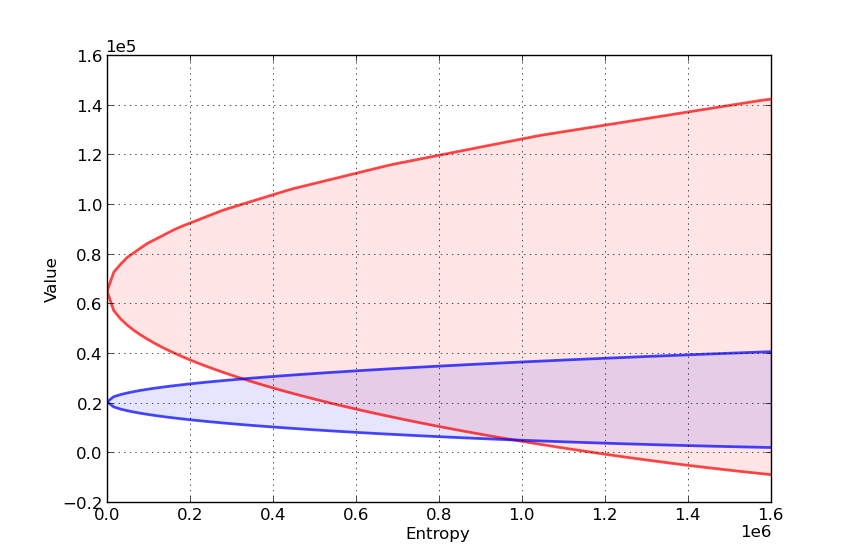 Can you explain the different shape of the value-entropy correspondence for the robust policy?

(revisit this discussion if you don’t know where (25.29) comes from) and the optimal policy is

Using the definition of \(\mathcal D\), we can rewrite the right-hand side more simply as

Although it involves a substantial amount of algebra, it can be shown that the latter is just \(\hat P\).