In this lecture we discuss a family of dynamic programming problems with the following features:

We call such problems discrete dynamic programs or discrete DPs.

Discrete DPs are the workhorses in much of modern quantitative economics, including

When a given model is not inherently discrete, it is common to replace it with a discretized version in order to use discrete DP techniques.

We use dynamic programming many applied lectures, such as

The objective of this lecture is to provide a more systematic and theoretical treatment, including algorithms and implementation while focusing on the discrete case.

Among other things, it offers

JIT compilation relies on Numba, which should work seamlessly if you are using Anaconda as suggested.

For background reading on dynamic programming and additional applications, see, for example,

Loosely speaking, a discrete DP is a maximization problem with an objective function of the form

Thus, actions influence not only current rewards but also the future time path of the state.

The essence of dynamic programming problems is to trade off current rewards vs favorable positioning of the future state (modulo randomness).

The most fruitful way to think about solutions to discrete DP problems is to compare policies.

In general, a policy is a randomized map from past actions and states to current action.

In the setting formalized below, it suffices to consider so-called stationary Markov policies, which consider only the current state.

In particular, a stationary Markov policy is a map \(\sigma\) from states to actions

It is known that, for any arbitrary policy, there exists a stationary Markov policy that dominates it at least weakly.

In what follows, stationary Markov policies are referred to simply as policies.

The aim is to find an optimal policy, in the sense of one that maximizes (4.1).

Formally, a discrete dynamic program consists of the following components:

Denote the set of all feasible policies by \(\Sigma\).

If a decision-maker uses a policy \(\sigma \in \Sigma\), then

Notice that we’re not really distinguishing between functions from \(S\) to \(\mathbb R\) and vectors in \(\mathbb R^n\).

This is natural because they are in one to one correspondence.

Let \(v_{\sigma}(s)\) denote the discounted sum of expected reward flows from policy \(\sigma\) when the initial state is \(s\).

To calculate this quantity we pass the expectation through the sum in (4.1) and use (4.2) to get

As discussed in detail below, optimal policies are precisely those that are \(v^*\)-greedy.

It is useful to define the following operators:

This can be written more succinctly in operator notation as

The two operators are both monotone

They are also contraction mappings with modulus \(\beta\)

For proofs of these results and those in the next section, see, for example, EDTC, chapter 10.

4.2.5. The Bellman Equation and the Principle of Optimality¶

The main principle of the theory of dynamic programming is that

By the definition of greedy policies given above, this means that

Now that the theory has been set out, let’s turn to solution methods.

The code for solving discrete DPs is available in ddp.py from the QuantEcon.py code library.

It implements the three most important solution methods for discrete dynamic programs, namely

Let’s briefly review these algorithms and their implementation.

Perhaps the most familiar method for solving all manner of dynamic programs is value function iteration.

This algorithm uses the fact that the Bellman operator \(T\) is a contraction mapping with fixed point \(v^*\).

Each iteration consists of

The latter computes an approximation to the value of a policy \(\sigma\) by iterating \(T_{\sigma}\) for a specified number of times.

This approach can be useful when the state space is very large and the linear system in the policy evaluation step of policy iteration is correspondingly difficult to solve.

A single household either consumes or stores its own output of a single consumption good.

The household starts each period with current stock \(s\).

The next period stock is therefore

We want to represent this model in the format of a discrete dynamic program.

To this end, we take

The following code sets up these objects for us

Let’s run this code and create an instance of SimpleOG.

Let’s create an instance using the objects stored in g

Let’s see what we’ve got here

(In IPython version 4.0 and above you can also type results. and hit the tab key)

The most important attributes are v, the value function, and σ, the optimal policy

Since we’ve used policy iteration, these results will be exact unless we hit the iteration bound max_iter.

Let’s make sure this didn’t happen

Another interesting object is results.mc, which is the controlled chain defined by \(Q_{\sigma^*}\), where \(\sigma^*\) is the optimal policy.

In other words, it gives the dynamics of the state when the agent follows the optimal policy.

Since this object is an instance of MarkovChain from QuantEcon.py (see this lecture for more discussion), we can easily simulate it, compute its stationary distribution and so on.

Here’s the same information in a bar graph 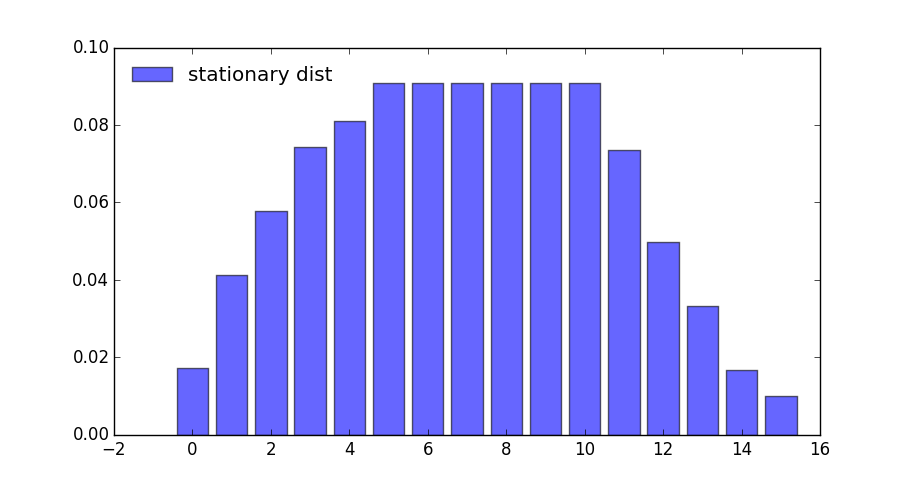 What happens if the agent is more patient? 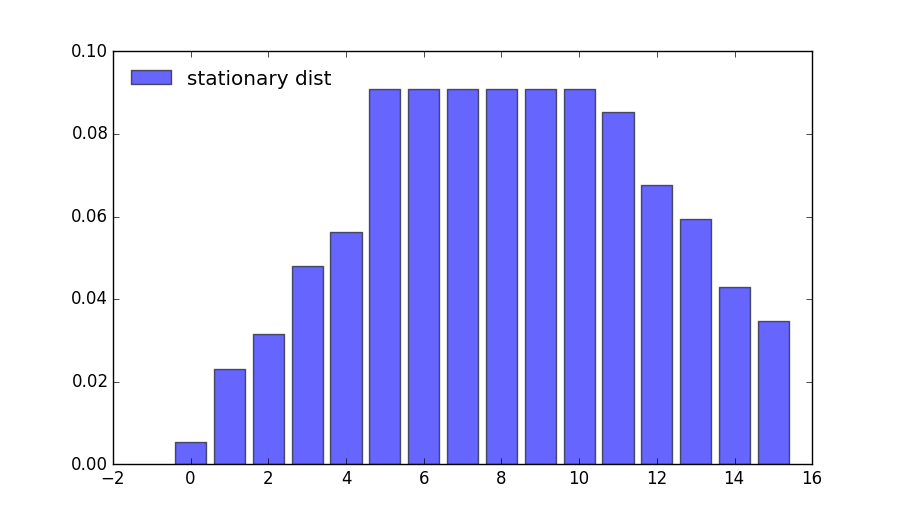 The DiscreteDP class in fact, provides a second interface to set up an instance.

One of the advantages of this alternative set up is that it permits the use of a sparse matrix for Q.

For larger problems, you might need to write this code more efficiently by vectorizing or using Numba.

In the stochastic optimal growth lecture from our introductory lecture series, we solve a benchmark model that has an analytical solution.

The exercise is to replicate this solution using DiscreteDP.

Details of the model can be found in the lecture on optimal growth.

Here we want to solve a finite state version of the continuous state model above.

We choose the action to be the amount of capital to save for the next period (the state is the capital stock at the beginning of the period).

Thus the state indices and the action indices are both 0, …, grid_size-1.

Action (indexed by) a is feasible at state (indexed by) s if and only if grid[a] < f([grid[s]) (zero consumption is not allowed because of the log utility).

Thus the Bellman equation is:

where \(k'\) is the capital stock in the next period.

The transition probability array Q will be highly sparse (in fact it is degenerate as the model is deterministic), so we formulate the problem with state-action pairs, to represent Q in scipy sparse matrix format.

(Degenerate) transition probability matrix Q (of shape (L, grid_size)), where we choose the scipy.sparse.lil_matrix format, while any format will do (internally it will be converted to the csr format):

(If you are familiar with the data structure of scipy.sparse.csr_matrix, the following is the most efficient way to create the Q matrix in the current case)

Here we intensively vectorized the operations on arrays to simplify the code.

As noted, however, vectorization is memory consumptive, and it can be prohibitively so for grids with large size.

Note that sigma contains the indices of the optimal capital stocks to save for the next period. The following translates sigma to the corresponding consumption vector.

The outcomes appear very close to those of the continuous version.

Except for the “boundary” point, the value functions are very close:

The optimal consumption functions are close as well:

In fact, the optimal consumption obtained in the discrete version is not really monotone, but the decrements are quite small:

The value function is monotone:

4.6.3. Comparison of the Solution Methods¶

Let us solve the problem with the other two methods.

Using DiscreteDP we replicate the figures shown in the lecture.

Let us first visualize the convergence of the value iteration algorithm as in the lecture, where we use ddp.bellman_operator implemented as a method of DiscreteDP

We next plot the consumption policies along with the value iteration

This appendix covers the details of the solution algorithms implemented for DiscreteDP.

We will make use of the following notions of approximate optimality:

Given \(\varepsilon > 0\), the value iteration algorithm

(While not explicit, in the actual implementation each algorithm is terminated if the number of iterations reaches iter_max)

The policy iteration algorithm terminates in a finite number of iterations.

It returns an optimal value function and an optimal policy function (unless iter_max is reached).

See also the documentation for DiscreteDP.