In a previous lecture, we covered some fundamental properties of covariance stationary linear stochastic processes.

One objective for that lecture was to introduce spectral densities — a standard and very useful technique for analyzing such processes.

In this lecture, we turn to the problem of estimating spectral densities and other related quantities from data.

Estimates of the spectral density are computed using what is known as a periodogram — which in turn is computed via the famous fast Fourier transform.

Once the basic technique has been explained, we will apply it to the analysis of several key macroeconomic time series.

Let’s start with some standard imports:

Now consider the problem of estimating the spectral density of a given time series, when \(\gamma\) is unknown.

In particular, let \(X_0, \ldots, X_{n-1}\) be \(n\) consecutive observations of a single time series that is assumed to be covariance stationary.

The most common estimator of the spectral density of this process is the periodogram of \(X_0, \ldots, X_{n-1}\), which is defined as

Alternatively, \(I(\omega)\) can be expressed as

The next section helps to explain the connection between the periodogram and the spectral density.

To interpret the periodogram, it is convenient to focus on its values at the Fourier frequencies

The answer is straightforward, although it does involve some algebra.

By carefully working through the sums, one can transform this to

With this notation, we can now write

Let’s now consider how to compute the periodogram as defined in (29.1).

There are already functions available that will do this for us — an example is statsmodels.tsa.stattools.periodogram in the statsmodels package.

However, it is very simple to replicate their results, and this will give us a platform to make useful extensions.

In general, given a sequence \(a_0, \ldots, a_{n-1}\), the discrete Fourier transform computes the sequence

Note: The NumPy function abs acts elementwise, and correctly handles complex numbers (by computing their modulus, which is exactly what we need).

A function called periodogram that puts all this together can be found here.

Let’s generate some data for this function using the ARMA class from QuantEcon.py (see the lecture on linear processes for more details).

Here’s a code snippet that, once the preceding code has been run, generates data from the process

where \(\{ \epsilon_t \}\) is white noise with unit variance, and compares the periodogram to the actual spectral density

This estimate looks rather disappointing, but the data size is only 40, so perhaps it’s not surprising that the estimate is poor.

However, if we try again with n = 1200 the outcome is not much better 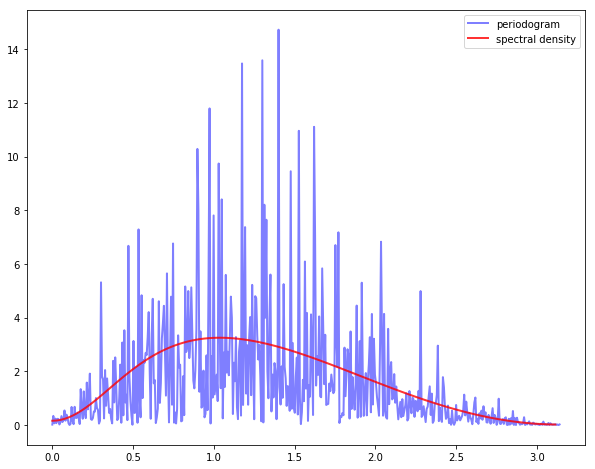 The periodogram is far too irregular relative to the underlying spectral density.

This brings us to our next topic.

There are two related issues here.

One is that, given the way the fast Fourier transform is implemented, the number of points \(\omega\) at which \(I(\omega)\) is estimated increases in line with the amount of data.

In other words, although we have more data, we are also using it to estimate more values.

A second issue is that densities of all types are fundamentally hard to estimate without parametric assumptions.

Typically, nonparametric estimation of densities requires some degree of smoothing.

The standard way that smoothing is applied to periodograms is by taking local averages.

In other words, the value \(I(\omega_j)\) is replaced with a weighted average of the adjacent values

This weighted average can be written as

In general, larger values of \(p\) indicate more smoothing — more on this below.

The next figure shows the kind of sequence typically used.

Note the smaller weights towards the edges and larger weights in the center, so that more distant values from \(I(\omega_j)\) have less weight than closer ones in the sum (29.3).

Our next step is to provide code that will not only estimate the periodogram but also provide smoothing as required.

Such functions have been written in estspec.py and are available once you’ve installed QuantEcon.py.

The GitHub listing displays three functions, smooth(), periodogram(), ar_periodogram(). We will discuss the first two here and the third one below.

Regarding the smooth() function, since smoothing adds a nontrivial amount of computation, we have applied a fairly terse array-centric method based around np.convolve.

Readers are left either to explore or simply to use this code according to their interests.

The next three figures each show smoothed and unsmoothed periodograms, as well as the population or “true” spectral density.

From the top figure to bottom, the window length is varied from small to large. 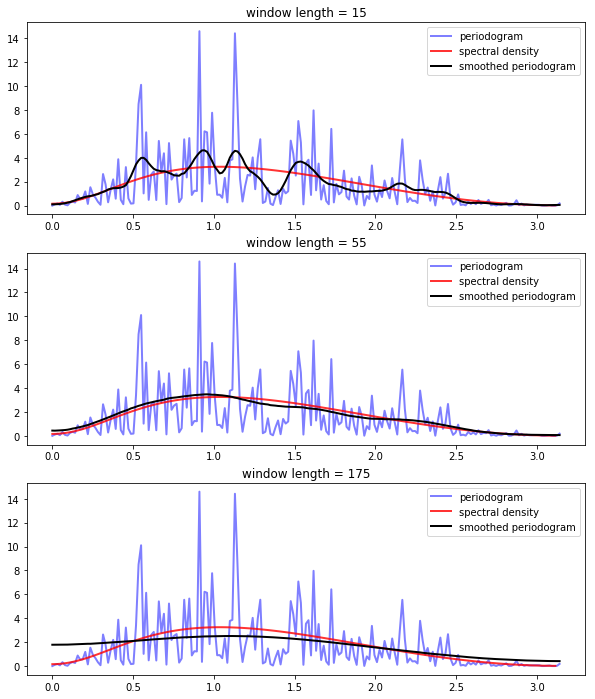 In looking at the figure, we can see that for this model and data size, the window length chosen in the middle figure provides the best fit.

Relative to this value, the first window length provides insufficient smoothing, while the third gives too much smoothing.

Of course in real estimation problems, the true spectral density is not visible and the choice of appropriate smoothing will have to be made based on judgement/priors or some other theory.

In the code listing, we showed three functions from the file estspec.py.

The third function in the file (ar_periodogram()) adds a pre-processing step to periodogram smoothing.

First, we describe the basic idea, and after that we give the code.

The essential idea is to

Step 1 is called pre-filtering or pre-whitening, while step 3 is called recoloring.

The first step is called pre-whitening because the transformation is usually designed to turn the data into something closer to white noise.

Why would this be desirable in terms of spectral density estimation?

The reason is that we are smoothing our estimated periodogram based on estimated values at nearby points — recall (29.3).

This will not be true in all cases, but it is certainly true for white noise.

For white noise, \(I\) is as regular as possible — it is a constant function.

Another way to put this is that if \(I\) is relatively constant, then we can use a large amount of smoothing without introducing too much bias.

Let’s examine this idea more carefully in a particular setting — where the data are assumed to be generated by an AR(1) process.

Suppose in particular that \(\{X_t\}\) is covariance stationary and AR(1), with

It follows that if we regress \(X_{t+1}\) on \(X_t\) and an intercept, the residuals will approximate white noise.

In view of an earlier result we obtained while discussing ARMA processes, \(f\) and \(g\) are related by

This suggests that the recoloring step, which constructs an estimate \(I\) of \(f\) from \(I_0\), should set

The code for ar_periodogram() — the third function in estspec.py — does exactly this. (See the code here).

Each time series is of length 150.

The difference between the three subfigures is just randomness — each one uses a different draw of the time series. 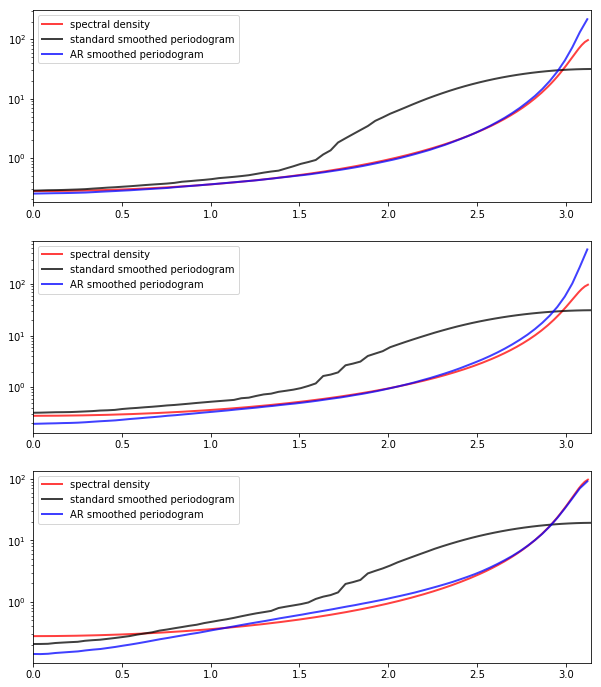 In all cases, periodograms are fit with the “hamming” window and window length of 65.

Overall, the fit of the AR smoothed periodogram is much better, in the sense of being closer to the true spectral density.

For the smoothed periodogram, the window type is “hamming”.

All periodograms are fit with the “hamming” window and window length of 65.