As stated in an earlier lecture, an asset is a claim on a stream of prospective payments.

What is the correct price to pay for such a claim?

The elegant asset pricing model of Lucas [Luc78] attempts to answer this question in an equilibrium setting with risk-averse agents.

While we mentioned some consequences of Lucas’ model earlier, it is now time to work through the model more carefully and try to understand where the fundamental asset pricing equation comes from.

A side benefit of studying Lucas’ model is that it provides a beautiful illustration of model building in general and equilibrium pricing in competitive models in particular.

Another difference to our first asset pricing lecture is that the state space and shock will be continuous rather than discrete.

Lucas studied a pure exchange economy with a representative consumer (or household), where

Either way, the assumption of a representative agent means that prices adjust to eradicate desires to trade.

This makes it very easy to compute competitive equilibrium prices.

There is a single “productive unit” that costlessly generates a sequence of consumption goods \(\{y_t\}_{t=0}^{\infty}\).

We will assume that this endowment is Markovian, following the exogenous process

An asset is a claim on all or part of this endowment stream.

The consumption goods \(\{y_t\}_{t=0}^{\infty}\) are nonstorable, so holding assets is the only way to transfer wealth into the future.

For the purposes of intuition, it’s common to think of the productive unit as a “tree” that produces fruit.

Based on this idea, a “Lucas tree” is a claim on the consumption endowment.

What is an appropriate price for a claim on the consumption endowment?

Since this is a competitive model, the first step is to pin down consumer behavior, taking prices as given.

Next, we’ll impose equilibrium constraints and try to back out prices.

In the consumer problem, the consumer’s control variable is the share \(\pi_t\) of the claim held in each period.

Thus, the consumer problem is to maximize (34.1) subject to

But this value is inherited as a state variable at time \(t\), which explains the choice of subscript.

We can write the consumer problem as a dynamic programming problem.

In fact, the endowment process is Markovian, so that the only relevant information is the current state \(y \in \mathbb R_+\) (dropping the time subscript).

This leads us to guess an equilibrium where price is a function \(p\) of \(y\).

Remarks on the solution method

Using the assumption that price is a given function \(p\) of \(y\), we write the value function and constraint as

We can invoke the fact that utility is increasing to claim equality in (34.2) and hence eliminate the constraint, obtaining

The solution to this dynamic programming problem is an optimal policy expressing either \(\pi'\) or \(c\) as a function of the state \((\pi, y)\).

What we need to do now is determine equilibrium prices.

It seems that to obtain these, we will have to

However, as Lucas showed, there is a related but more straightforward way to do this.

Since the consumption good is not storable, in equilibrium we must have \(c_t = y_t\) for all \(t\).

In addition, since there is one representative consumer (alternatively, since all consumers are identical), there should be no trade in equilibrium.

In particular, the representative consumer owns the whole tree in every period, so \(\pi_t = 1\) for all \(t\).

Prices must adjust to satisfy these two constraints.

Now observe that the first-order condition for (34.3) can be written as

Next, we impose the equilibrium constraints while combining the last two equations to get

In sequential rather than functional notation, we can also write this as

This is the famous consumption-based asset pricing equation.

Before discussing it further we want to solve out for prices.

Equation (34.4) is a functional equation in the unknown function \(p\).

The solution is an equilibrium price function \(p^*\).

Let’s look at how to obtain it.

Instead of solving for it directly we’ll follow Lucas’ indirect approach, first setting

To solve (34.7) we’ll use a standard method: convert it to a fixed point problem.

In what follows, we refer to \(T\) as the Lucas operator.

This means that we can use fixed point theory to obtain and compute the solution.

We now show that

(Note: If you find the mathematics heavy going you can take 1–2 as given and skip to the next section)

Observe that, since integrals get larger when absolute values are moved to the inside,

The preceding discussion tells that we can compute \(f^*\) by picking any arbitrary \(f \in cb\mathbb{R}_+\) and then iterating with \(T\).

To solve the model, we write a function that iterates using the Lucas operator to find the fixed point.

Solving the model and plotting the resulting price function

We see that the price is increasing, even if we remove all serial correlation from the endowment process.

The reason is that a larger current endowment reduces current marginal utility.

The price must therefore rise to induce the household to consume the entire endowment (and hence satisfy the resource constraint).

What happens with a more patient consumer?

Here the orange line corresponds to the previous parameters and the green line is price when \(\beta = 0.98\). 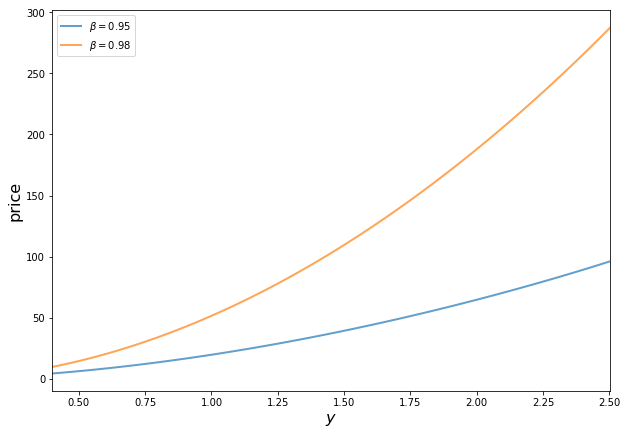 We see that when consumers are more patient the asset becomes more valuable, and the price of the Lucas tree shifts up.

Exercise 1 asks you to replicate this figure.

Replicate the figure to show how discount factors affect prices.